Justice and vengeance in Bangladesh

Flaws in the diamond (6)

The politics of dam-building 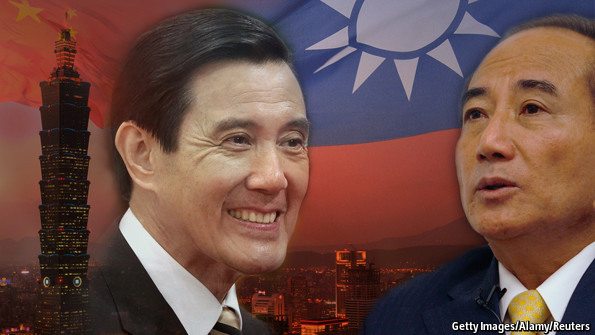 RARELY in Taiwan’s 17 years of democracy have opinion polls painted a president as unpopular as Ma Ying-jeou. Though he is often accused of being ineffectual, it is actually a rare show of decisiveness that has lost Mr Ma (pictured, left) recent support. At issue is his handling of alleged wrongdoing by a titan of Mr Ma’s Kuomintang (KMT), Wang Jin-pyng (pictured, right). The effect has been to threaten the unity of the ruling party, as well as send ripples across the Taiwan Strait.
“We can’t just muddle our way through this,” Mr Ma said on September 8th. That was two days after prosecutors alleged that Mr Wang had used his influence as the speaker of parliament in a court case. He had, they said, tried to persuade the justice minister, Tseng Yung-fu, to lobby prosecutors not to revive an embezzlement case against a prominent opposition lawmaker. Ker Chien-ming had been found guilty, but a higher court had overturned the verdict. Mr Ma said that Mr Wang’s alleged “influence-peddling” marked “the most shameful day in the history of democracy and rule of law in Taiwan”. On September 11th Mr Wang was expelled from the KMT.

In this section
Reprints
Related topics
In a country fed up with widespread corruption, Mr Ma might have expected applause. Yet he has conveyed the impression of caring more about flooring a political rival than upholding judicial independence. Meanwhile, Mr Wang’s protestations of innocence and his appeal as a soft-spoken, native-born politician (Mr Ma was born in Hong Kong of mainland Chinese parents) have earned him support across the political spectrum. On September 13th a court in Taipei, the capital, allowed Mr Wang to keep his party membership—and hence his position as speaker—while contesting the expulsion order. Unlike the justice minister, who resigned when the allegations were made public, Mr Wang is fighting.
Mr Ma is now in the humiliating position of having his legislative agenda handled by a man whom he has all but condemned as unfit for office. Worse, Mr Wang has long irritated the president by making concessions to opposition legislators over bills that Mr Ma, whose party has a small majority in the parliament, would prefer to ram through. An embittered Mr Wang is likely to be even less obliging. To add to the president’s embarrassment, other members of the KMT, including Lien Chan, the party’s honorary chairman, have criticised his handling of Mr Wang’s case. A senior colleague says the “general feeling” among KMT leaders is that Mr Ma acted hastily, having apparently failed to realise that Mr Wang might fight back in court.
The drama also has a Chinese dimension. Mr Ma’s frustration with Mr Wang had been growing even before prosecutors produced transcripts of secretly recorded telephone conversations appearing to show the speaker’s cosy relationship with Mr Ker, who is chief whip of the opposition Democratic Progressive Party (DPP). Mr Ma had been eager for the parliament to give its approval to an agreement signed in June with China over the liberalisation of cross-strait trade and investment in services. The pact covers everything from banking to beauty parlours. Mr Wang had agreed to an opposition demand that sections of it be voted on in turn rather than as an entire package—an unprecedented approach in dealings with China. Taiwanese officials now fear delays and fresh rounds of haggling with China. They also worry about the reaction elsewhere. Taiwan’s chief trade negotiator, Cho Shih-Chao, says that if the island’s trading partners think that any agreement might unravel in the legislature, then “they might think again” about entering into free-trade talks.
The new trade pact may well encounter difficulties. DPP legislators are habitually wary of any deals with the mainland. They fear that China’s aim is to hasten its economic integration with Taiwan and use the influence it thereby gains to push the island into talks on reunification. Taiwanese officials say the agreement is more favourable to Taiwan than it is to China. They dismiss opposition claims that it will lead to a large influx of mainland migrants and threaten small Taiwanese businesses with unfair Chinese competition from deep-pocketed state-backed firms.
But even some KMT legislators have reservations about the pact, or at least what they see as Mr Ma’s weakness in talking up its merits. With Mr Ma’s popular support down to 9.2%, according to an opinion poll published on September 15th, these legislators worry more about their re-election prospects than offending the president. Mayoral elections will be held late next year. Parliamentary and presidential polls are due in January 2016.
China has expressed bafflement at the response in Taiwan to the trade deal. But it has avoided comment on the rift within the ruling party. It is likely to be deeply worried by both. A KMT split might facilitate a return to power by the DPP, which was helped into the presidency in 2000 by just such infighting. The following eight years of DPP rule were marked by tensions between Taiwan and China, which believed the party was trying to secure the island’s formal independence. Even under the KMT, future cross-strait deals are likely to be dissected by legislators in the same way as the services pact. The prospect of talks on a political settlement (urged by China but resisted in Taiwan even by Mr Ma) grows ever more remote.
Perhaps China is steeling itself for a possible DPP comeback (even though the party is hardly a model of unity itself). Since a visit to China in October 2012 by a former prime minister, Frank Hsieh Chang-ting, several DPP legislators and pro-DPP academics have been welcomed on the mainland, holding meetings with Chinese officials who once shunned them.
This does not mean acquiescence with the DPP’s independence-leaning stance, however. China, it appears, wants to persuade DPP politicians that the mainland is not as threatening as they think. “They realise what kind of war we are fighting” against free-trade sceptics in Taiwan’s parliament, says Mr Cho, the negotiator. Mr Ma, commander-in-chief of that war, has recently done his troops few favours.
From the print edition: Asia
張貼者： hanching chung 於 下午4:53