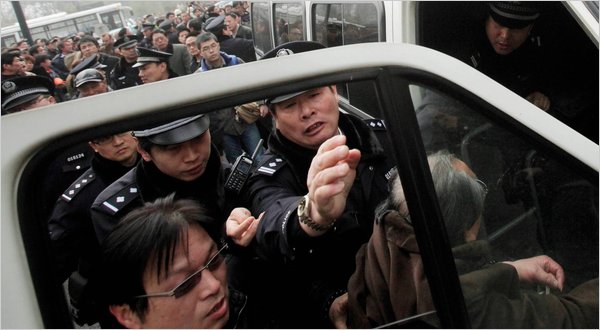 Police officers in downtown Shanghai, responding to an online call for an antigovernment protest, arrested a man Sunday afternoon outside the Peace Cinema.

By ANDREW JACOBS and JONATHAN ANSFIELD

BEIJING — The call to action shot across mobile phones and Internet chat sites, urging people to converge on 13 Chinese cities to demand an end to corruption, inflation and the strictures of authoritarian rule. “The Chinese people do not have the patience to wait any longer,” said one message.

Why China Is Nervous About the Arab Uprisings

Is a growing economy enough to keep broader discontent at bay?

Police arrested a man in front of the Peace Cinema in downtown Shanghai after calls for a “Jasmine Revolution” protest on Sunday.

The anonymous organizers got a sizable turnout — but in China, most of those who poured into squares and shopping centers were police officers and plainclothes security agents.

Two months of upheaval in the Mideast have cast doubt on the staying power of all authoritarian governments. But in China calls for change are so far being met with political controls wielded by authorities who, even during a period of rising prosperity and national pride, have not taken their staying power for granted.

The nearly instantaneous deployment of the police to prevent even notional gatherings in big cities the past two weeks is just one example of what Chinese officials call “stability maintenance.” This refers to a raft of policies and practices refined after “color revolutions” abroad and, at home, tens of thousands of demonstrations by workers and peasants, ethnic unrest, and the spread of mobile communications and broadband networking.

Chinese officials charged with ensuring security, lavishly financed and permitted to operate above the law, have remained perpetually on edge, employing state-of-the-art surveillance, technologically sophisticated censorship, new crime-fighting tools, as well as proactive efforts to resolve labor and land disputes, all to prevent any organized or sustained resistance to single-party rule.

“It is a comprehensive call to arms for the entire bureaucracy to promote social stability,” said Murray Scot Tanner, a China security analyst at C.N.A., a private research group in Alexandria, Va.

Since the first widespread calls for Middle East-style demonstrations in China were published two weeks ago on an American Web site that is blocked in China, the police have reacted with brutal efficiency. They have placed more than 100 dissidents and human rights campaigners under house arrest and threatened others who forwarded messages about the protests, and have detained six prominent lawyers and activists on suspicion of inciting subversion. Censors have also intensified the filters on microblogs, already among the tightest in the world.

At an unpublicized meeting in February, the Politburo outlined heightened controls to prevent the type of revolts that toppled governments in Egypt and Tunisia, said one ranking journalist who declined to be named.

“The crackdown has been the most severe we’ve seen in years,” said Wang Songlian, a researcher at Chinese Human Rights Defenders.

Despite persistent calls for political reform among the country’s small and embattled group of human rights advocates, most analysts agreed that China faced a smaller risk of street unrest than did Egypt, Libya and Bahrain. Unlike those countries, where oligarchic rule and high unemployment have fed discontent, China’s leaders have largely tamed widespread antipathy through policies that have led to robust economic growth and through selective repression that most Chinese have come to tolerate.

Over the past five years, stability maintenance, known as “weiwen” in Chinese, has become a multiagency juggernaut that relies on a sophisticated menu of Internet censorship, the harassment of blacklisted troublemakers and an industrial complex of paid informants and contractors. The vast bureaucracy extends from the Politiburo Standing Committee’s chief law enforcer, Zhou Yongkang, to neighborhood “safety patrol” volunteers on the lookout for Falun Gong members and low-level clashes that can mushroom into large-scale disturbances.

The party has matched this tight fist with a buildup of mediation techniques and manpower within party organizations and a system of rewards and punishments for bureaucrats who fulfill — or fail to meet — social harmony goals.

The problem, critics say, is that the high-level pressures to achieve stability often force local officials to clamp down on the symptoms of social discontent rather than address the underlying inequities. That feeds a spiral of new abuses and controls. Just as troubling, legal scholars and judges say, is a party drive to prioritize defusing conflict over adjudication by law.

Yu Jianrong, a leading sociologist at the Chinese Academy of Social Sciences, has been blogging and traveling the country to warn local officials that the fixation on weiwen fuels government mistrust. “It is tantamount to drinking poison to quench one’s thirst,” he recently wrote in Caixin weekly.

During a study session last month for provincial and ministerial leaders, President Hu Jintao called for a mix of increased Internet controls and investment in local government services to reduce “inharmonious factors to the minimum.”

Under a new five-year development plan, which is expected to be passed at the annual legislative sessions that begin this week in Beijing, officials pledge new “social management” mechanisms to pacify unrest.

Still, studies suggest such outbreaks have yet to subside.

Shanghai’s Jiaotong University, in its annual report on crisis management released this year, tallied 72 “major incidents” of social unrest in 2010, compared with 60 in 2009. Crises hit the media faster too: about 33 percent were reported the day they occurred, 67 percent on the Internet.

China budgeted an estimated $77 billion for public security alone last year, according to a Tsinghua University study that was based on official police budgets, putting the costs of internal security almost on par with national defense spending. Some experts say the true number may be even higher.

Liaoning Province in northeastern China devoted 15 percent of its revenues to weiwen last year, according to media reports. Lianjiang, in southern Guangdong Province, acknowledged spending as much on stability maintenance in 2009 as it did in the previous five years combined.

“There’s such a nervousness of letting things get out of control that even students complaining about the price of food in the school canteen will be reported as social instability,” said David Kelly, a visiting scholar at Peking University who studies the stability maintenance system.

The strategy took root in the late 1990s as China grappled with mass layoffs caused by the privatization of state-owned enterprises, and accelerated in 2004 when a new brand of legal activism emerged in China and the color revolutions swept aside authoritarian rulers in the former Soviet republics.

But what began as a governing strategy morphed into an entrenched bureaucracy as China reacted to a series of pivotal challenges, including the 2008 Olympics, ethnic rioting in Tibet and Xinjiang, and Charter ’08, a petition calling for Western-style democratic liberties that proliferated online and led to the jailing of Liu Xiaobo, the 2010 Nobel Peace Prize winner, who helped draft it.

While Mr. Hu has directed the push, the country’s security and propaganda authorities have seized on such events “to get as much money and power as possible,” said an editor at a party publication who spoke off the record because he feared repercussions.

In the past few years, thousands of stability maintenance offices have opened, and more than 300,000 government functionaries have been enlisted in “community service management,” according to Xinhua, the state news service. Local officials have cycled through Beijing for instruction in tactics to disrupt the Internet and disperse crowds with talks rather than force, and for training in “channeling public opinion.”

In an article last year in The Southern Daily newspaper, officials in Lianjiang boasted how the city had installed surveillance cameras at major intersections, hired several thousand neighborhood informants and established the “Flying Tigers,” a patrol of 340 young men recruited to assist the police in handling unrest.

A “peace prize” of up to $22 was awarded to local leaders who successfully stamped out trouble in their jurisdictions. As a result, officials said, there were no “mass incidents” in the first eight months of 2010, and the number of people filing complaints in Beijing dropped 25 percent.

“The facts demonstrate that stability can be bought,” Xu Shun, the Lianjiang party secretary, told the newspaper.

Propaganda officials have come to consider the Internet the front line of defense against instability.

Central propaganda authorities determined in 2009 that local officials had two hours or less on average to contain news of “sudden incidents” from escalating on the Internet, though it remained a tough chore.

Under one government initiative, software engineers have been developing an automated system that can track trending topics and better pinpoint potentially disruptive news, according to industry experts.

“For example, at what point will a debate peak and drift more toward antigovernment sentiment?” one executive said. “They need to find the right time to step in and control it, but not appear too restrictive.”

Under the mandates of weiwen, judges and legal scholars say the judicial system has largely abandoned two decades of reform and returned to the Mao-era practice of mediation that many lawyers describe as coercive.

Judicial promotions are increasingly tied to the ability to settle or dismiss cases and prevent litigants from appealing court decisions or filing petitions — an age-old form of redress in which the aggrieved file complaints with the authorities.

Carl Minzner, an expert in Chinese law at Washington University in St. Louis, said many courts will coerce plaintiffs into settling lawsuits regardless of the facts or will simply obstruct them from filing lawsuits in the first place. To illustrate this shift, he cited a “model judge” of 2010, Chen Yanping, who was lionized by the Supreme People’s Court for using mediation to resolve 3,100 cases without a single appeal or petition.

The flow of money dedicated to stability has also spawned shady businesses like “black jails,” the extralegal holding pens for the petitioners who flood Beijing to file complaints against the authorities in their hometowns. The Chinese media have exposed how private security companies in the capital, some with connections to the police, have rounded up petitioners in Beijing on behalf of some 70 local governments.

Like the excesses of weiwen, the disproportionate crackdown on China’s phantom Jasmine Revolution could also fuel new discontent. Last week the authorities in Beijing told some members of unauthorized churches not to gather on Sunday, and in cryptic conversations, they sought to dissuade foreign reporters from covering the rallies. Instead, they showed up in droves.

“Limiting people’s freedom and trying to restrict the flow of information isn’t dealing with the underlying problems China faces,” said Pu Zhiqiang, a human rights lawyer who said he has been trailed for a week by plainclothes security agents. “I think this strategy is only going to create more enemies of the government.”

China Warns US About Push for Internet Freedom
Voice of America
China's Foreign Ministry on Thursday warned the United States not to use Internet access issues as a "pretext" to interfere in China's internal affairs. The warning came in response to a speech by US Secretary of State Hillary Clinton Tuesday, ...