Pro-democracy protesters in Hong Kong have brought parts of the city center to a standstill. Police have used tear gas to disperse crowds calling for more political freedom from Beijing.
Tens of thousands of pro-democracy protesters on Sunday surrounded a government enclave and blocked streets in central Hong Kong in an escalation of the demonstrations that the city has experienced over the past days.
Police used tear gas for the first time during the protests and baton-charged a crowd blocking a key road.
Police also used pepper spray on demonstrators trying to break through a police blockade designed to stop people joining the crowds who have staged a sit-in outside Hong Kong's government headquarters since Friday.
Demonstrators, many wearing goggles and plastic wrap to protect themselves against pepper spray, blocked traffic on Harcourt Road, a major throughway, as well as sections of several other roads in the financial district. At least 29 police and civilian have been injured in clashes.
The escalation in protest actions by pro-democracy supporters comes after a week of student-led demonstrations against Beijing's refusal to grant the city fully democratic elections in 2017.
China's legislature last month ruled that candidates for the election of Hong Kong's leader would first be vetted by a committee of Beijing loyalists that has up to now chosen who governs the former British colony. Many see the ruling as running counter to promises by China that the elections would be carried out on the basis of "universal suffrage."
'Occupy' joins the fray
On Saturday evening, the activist group Occupy Central announced it would be launching its long-threatened campaign to shut down the city's financial center three days earlier than planned, in an apparent bid to use the momentum gained by the student-led protests over the past week.
The group is calling on Beijing to withdraw last month's decision and for it to allow a consultation on political reform to start anew.
A police statement issued late on Saturday reiterated that the demonstration near the government complex was "unlawful." A spokesperson for China's Hong Kong and Macau Affairs Office said the central Chinese government fully supported Hong Kong's treatment of protesters "in accordance with the law."
Hong Kong leader Leung Chun-ying has pledged "resolute" action against Occupy Central and other pro-democracy activists.
China took over Hong Kong from British colonial rule in 1997 under an agreement that foresaw a "one country, two systems" principle, allowing Hong Kong relative autonomy until 2047. Beijing critics fear that the political freedoms granted to the city until now are being eroded under increasing influence from the Chinese mainland.
tj/glb (Reuters, AP, AFP)

HONG KONG — The police in Hong Kong began tightening on Sunday a ring of security around thousands of pro-democracy protesters who have besieged the city government for three days. But by clearing the protesters and appeasing the Chinese Communist Party, the Hong Kong authorities could risk a bigger backlash from even more city residents, said experts.
香港——香港警方周日开始增强环包数千名已包围香港政府三日的亲民主抗议者的安保力量。但专家表示，香港当局清退抗议者并讨好中国共产党可能会使其遭受引来来自更多居民的、更大的激烈抵抗的风险。
The Hong Kong government has been grappling with how to defuse the sit-in protest that started on Friday night and stretched over the weekend, swelling at times to a crowd of tens of thousands. Although the police had been practicing for months to quell planned protests over election rule changes, they failed on Friday to prevent hundreds of students from charging into a forecourt at the city government headquarters, drawing many more supporters who occupied an avenue and open areas next to the fenced-in forecourt. The students inside the forecourt were dragged off by the police on Saturday, but the supporters outside have stayed.
香港政府一直在探索如何驱散周五晚间开始、并延续整个周末的静坐抗议——抗议规模几度扩大到数万人。尽管警方已就如何平息针对选举规则变化而策划的游行演练了数月，他们周五还是没能阻止数百名学生闯入香港政府总部的前庭，并引来更多支持者占领了那个被围栏围住的前庭旁的一条大道及开放区域。前庭内的学生周六被警方拖出，但是前庭外的支持者们还留在原地。
On Sunday afternoon, the police began to seal off the sit-in area, stopping supporters from entering. The city leader, Leung Chun-ying, told a news conference that the protesters were using illegal methods to threaten the government, and he declared his “absolute trust in the professional judgment of the police.”
周日下午，警方开始封锁静坐区域以阻止支持者进入。香港领导人梁振英在一场新闻发布会上说抗议者正在用违法方式威胁政府，并声明其“绝对信任警方的专业判断”。 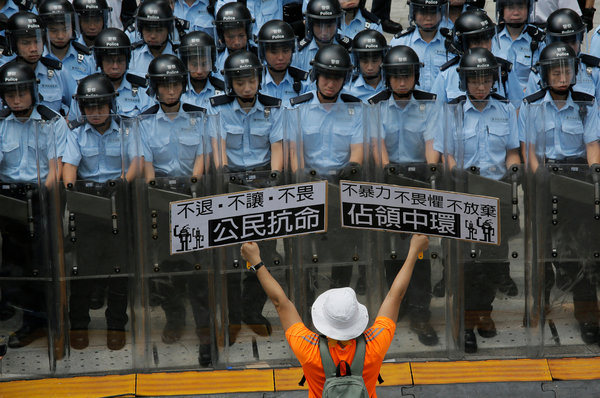