Nov 17th 2011, 14:54 by The Economist online
Where are the world's biggest Chinese and Indian immigrant communities?
MORE Chinese people live outside mainland China than French people live in France, with some to be found in almost every country. Some 22m ethnic Indians are scattered across every continent. Diasporas have been a part of the world for millennia. But today their size (if migrants were a nation, they would be the world’s fifth-largest) and the ease of staying in touch with those at home are making them matter much more. No other social networks offer the same global reach—and shrewd firms are taking notice. Our map highlights the world's top 20 destinations for Chinese and Indian migrants. 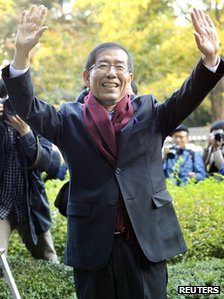 South Korea's political parties are looking distinctly nervous these days.
The governing conservative Grand National Party (GNP) has said it wants to re-invent itself as a party of "digital nomads" to better listen to the people.
Its main opposition, the Democratic Party (DP), is talking about a "wave of social change" and looking at forming a wider alliance to strengthen its position.
And the reason for all this nervousness? A bespectacled civic activist called Park Won-soon. Or, as he is now known: the mayor of Seoul.
Mr Park won the election for mayor last month, without any previous experience as a politician, and without joining any of South Korea's political parties.
A generation after democracy emerged here, his win is being described by analysts as a "sea change" in South Korean politics.
The elevation of an independent candidate to the second-most powerful job in the country would be a wake-up call at the best of times, but this has come just as South Korea is gearing up for national parliamentary and presidential elections next year.
And if the reality of an independent mayor is a shock, the dimly-glimpsed prospect of an independent president is sending shivers through the main parties.
Added to which, the newly-elected Mr Park is not a man to keep his criticism of the political establishment to himself.
At a briefing for journalists this month, he spoke frankly about South Korea's battle with its US Free Trade Agreement, and about the best approach to take with North Korea.
He also said his conservative mayoral predecessors - one of whom is now South Korea's president - had used their positions to climb the political career ladder and "did not listen" to the people.
The idea that politicians here have stopped listening is a common one. And it is not only directed at the governing GNP.
Mr Park beat the GNP candidate on election day itself, but he also beat the opposition party candidates in a primary race beforehand - a decision in which voters and opinion polls played a strong role.
'New politics'

They yearn for the perfect outsider, but are often disappointed once he or she is in power - Mr Park will fall victim to this himself eventually”

Mike Breen South Korea analyst
Woo Jung-yeop, a research fellow with South Korea's Asan Institute for Policy Studies, says that while the mayoral election may have frightened the GNP, it has also has posed a real problem for the opposition - how to benefit from the surge in voter support for left-wing outsiders.
"The Democratic Party wants to be centre-left, but the others want clearer ideology in economics and relations with North Korea. It will be very interesting to see how the DP will react to that pressure," he says.
Some trace this disillusionment to the kind of welfare-focused policies being highlighted by Park Won-soon and his allies in civic activism.
The gap between rich and poor is widening in South Korea, say analysts, and politicians sometimes appear torn between the big conglomerates who provide the backbone of the economy and the voters - many of whom feel they are losing out on the returns.
But others believe the problem is much wider.
A survey carried out by some of South Korea's main media outlets the day after Mr Park's win found a third of those polled said they believed South Koreans wanted "a new kind of politics" entirely.
Seoul-based commentator Tom Coyner, writing in the JoongAng Daily newspaper, concluded "the populist desire for change is undeniable".
People are "sick and tired of traditional politics", he said, both the conservatives and the progressives.
'Obama moment'? 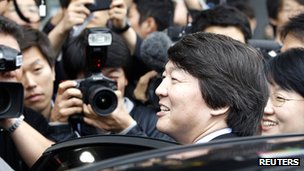 Ahn Cheol-soo also captured the public imagination in the run-up to the mayoral campaign
At least, those under 50 seem to feel that way. Opinion polls suggest Park Won-soon was carried to the mayor's office on a wave of support from younger South Koreans.
His campaign funding was made up largely of small donations made online, and exit polls point to those in their 20s and 30s as his biggest supporters.
And he is not the only newcomer to have grabbed the political spotlight. One of his key supporters during the race was Ahn Cheol-soo, a professor and IT businessman who captured the public imagination in the run-up to the campaign - but who refused, in the end, to run himself.
Which means he is, theoretically at least, available for the presidential race next year. And that is leaving aside the question of who else might emerge from outside the political establishment between now and the start of campaign season.
So will 2012 be South Korea's "Obama moment" - an election where young people, social media and a desire for change carry someone different to the top job?
Mike Breen, a resident and analyst of South Korea for over 20 years, says this political disillusionment is not as new as it appears - and runs a lot deeper.
"It tells you something about the [South] Korean voting public that this is a country where people don't like their leaders; they don't like their politicians," he said.
"They yearn for the perfect outsider, but are often disappointed once he or she is in power. Mr Park will fall victim to this himself eventually."
Political legacy
The problem, Mike Breen believes, is that Korea's democratic leaders have a tough act to follow, in the shape of South Korea's autocratic second president, Park Chung-hee.
"Park Chung-hee is still the model with which leaders are compared. He was a dictator, who could do virtually what he wanted; he had a poor country to start with - which he built up and gave everyone jobs; and he had 18 years in which to do it."
By comparison, politicians now have a harder time, he says.
"Now South Korea is already a democracy, it's already developed, and you have only five years as president, with your hands tied behind your back - how do you replicate what Park Chung-hee achieved?"
That is as big a dilemma for independents as it is for party politicians.
But here is another: the voting public also appear rather divided on the issue of activists entering the political scene.
Park Won-soon may have won the race for mayor, says Dr Woo Jung-yeop, "and Ahn Cheol-soo may still be polling a front-runner for president, but according to a recent survey, 50% of [South] Koreans believe activists should remain as 'referees' of the political scene, not become players".
This is one small glimmer of hope as South Korea's political veterans prepare for the starting whistle.

Pakistan and the United States

Not so warm and fuzzy

◎俞智敏
Bangladesh can justly claim to be a nation born of language, but its status as a cradle of linguistic diversity is under threat from nationalist pride and economic growth.
孟加拉可以名正言順地自稱為是由語言而誕生的國家，但孟加拉身為語言多元化發源地的地位，卻正受到民族驕傲與經濟成長的威脅。
Of the more than 30 recognised languages spoken in Bangladesh, experts say 20 are now on the verge of extinction.
在孟國逾30種獲官方認可的語言中，專家認為有20種正瀕臨滅絕。
Many languages are inherently vulnerable, having no script and relying instead on a rich but fragile oral tradition of folk songs and story telling.
許多語言原本就很容易消失，因為這些語言沒有文字，只能仰賴民謠與說故事等豐富卻脆弱的口語傳統流傳下來。
Bangla, or Bengali, is the undisputed heavyweight in Bangladesh’s linguistic arena, spoken by 95 percent of the population and the sole passport to a decent education and career.
在孟加拉的語言競技場中，孟加拉語毫無疑問地是重量級語言，全國有95%的人口說孟加拉語，這也是通往良好教育和職業的唯一道路。
National pride in the Bangla language runs deep and is cemented with the blood of the "language martyrs" -- students shot dead by police on February 21, 1952, when Bangladesh was still East Pakistan.
孟加拉人對孟加拉語有著根深蒂固的民族自豪，又因「語言烈士」為其所拋灑的鮮血而更形凝聚，這些烈士是在1952年2月21日遭警方射殺，當時孟加拉仍屬於東巴基斯坦。
The students were protesting the Pakistani government’s Urdu-only policy and demanding that Bangla be recognised as an official language. The deaths triggered the start of a nationalist struggle that finally ended with the creation of Bangladesh after victory in the 1971 independence war with Pakistan.
遇害學生是抗議巴基斯坦政府施行獨尊烏爾都語的政策，要求承認孟加拉語為官方語言之一。學生的死亡揭開了孟加拉民族獨立鬥爭的序幕，在孟加拉於1971年打贏與巴基斯坦間的獨立戰爭、建立國家後才告終。
But now Bangla’s dominance in schools, the workplace and cultural life in general is threatening those rights in Bangladesh itself. （AFP）
但現在孟加拉語在學校、職場與整體文化生活中的獨大地位，卻已威脅到孟加拉境內其他語言的權利。（法新社）
新聞辭典
cradle：名詞，原指搖籃，引申為指某事物的起源地，如Fossil records indicate that Africa was the cradle of early human evolution.（化石紀錄顯示，非洲是早期人類演化的起源地。）
script：名詞，指書寫用的字母，如Arabic/Cyrillic/Roman script（阿拉伯／古代斯拉夫／羅馬字母）。
passport： 名詞，原指護照或通行證，引申為指達到某一目的的手段（其後加to），如Many students opt for business studies simply because it sounds like a passport to a good job.（許多學生選擇唸商業科系，只是因為它聽起來像是通往好工作的通行證。）

Bereft of leaders, an Asian giant is destined for a period of lower growth. The human cost will be immense (50)